Available to give talks? Yes

Available for school visits? No

Chief Reporter for the Yorkshire Post in York for forty years feature writing and news reporting on everything in the city from murders to burning cathedrals and archaeological ‘digs’ .   On  retirement became a full time student at York University taking a BAHons in English Literature. 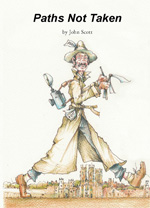 Paths Not Taken
Alston Books, 2014. Paperback
Description: This is a lively personal account of the growth of York from a forgotten backwater of a city after World War Two into the bustling tourist attraction it is today. It is seen through the eyes of a young National Serviceman returning home to his sleepy cathedral city and finding it dingy and shabby from the war. He becomes a reporter on the local  paper chronicling events as the city slowly shakes itself back to life.
Find out more and buy from:  Amazon (paperback) | Amazon (Kindle)|  john@alstonscott.wanadoo.co.uk

University at Last
Alston Books, 2010. Paperback
Description: Sixty year old granddad decides to get himself an education and becomes an undergraduate at York University.  However happily drifting along on academic Cloud Nine  and constantly forgetting the household chores  causes marital tensions.

Find out more and buy from: Amazon  | john@alstonscott.wanadoo.co.uk

Does He Speak Welsh
Red ‘n’ Ritten, 2008. Paperback
Description:   A schoolboy account of the German bombing raid on York after being a lonely evacuee in Wales where everyone around him spoke Welsh and his only escape was to become the town’s baker boy  helping his Uncle Bob make and deliver the town’s bread.
Find out more and buy from: Amazon | john@alstonscott.wanadoo.co.uk

One thought on “John Scott”