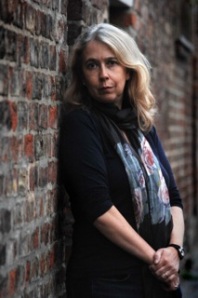 We are very sad to report that Helen died in 2017.

I write fiction, poetry and plays. I worked as an actor before becoming a teacher, and recently spent five years teaching in prisons. I have an MA in Writing from Sheffield Hallam University. I grew up in Birmingham and Oldham, and after living in London for many years, I came north and settled in York, where I live with my family. I was the winner of the Northern Crime Competition 2012. To Catch A Rabbit is my debut novel, and was first published in 2013 by Moth Publishing.

To Catch a Rabbit
New Edition published by Allison & Busby, January 2015
Genre: Crime
Set in York? Partially
Description: There is nowhere to run…
A dead woman sits slumped against the door of a grubby trailer. She’s on Sean Denton’s patch, but who is she, how did she get there and why doesn’t CID want to investigate? As Doncaster’s youngest PCSO, Denton takes the case into his own hands, but he’s way out of his depth. When people are reported missing, Sean must work backwards – facing corruption from outside and inside the force – before anyone else falls victim to South Yorkshire’s murky world of migrants and the sex-trade.
Meanwhile Karen Friedman, professional mother of two, learns her brother has disappeared. She desperately needs to know he’s safe, but once she starts looking, she discovers unexpected things about her own needs and desires.
Played out against a gritty landscape on the edge of a northern town, Karen and Sean risk losing all they hold precious.
Reviews: ‘A hugely assured and gripping debut. Let’s hope we see a lot more of Sean Denton.’ Mark Billingham
‘This is one of those rare finds – a literary crime novel that you can’t put down.  It’s exciting, pacey, vivid, and humane.  Helen Cadbury can write and she can tell a story: read her!’ Lesley Glaister
Awards: Winner of the Northern Crime Award 2012
Read a sample: Here
Find out more: At my website
Buy from: Amazon